Will Using CBD Oil Trigger A False Positive On A Drug Test?

People assume that CBD oil products are free of THC, the active ingredient in cannabis that gets you high.

That’s not always the case though, which is why CBD oil could trigger a false positive for cannabis metabolites on a drug test.

That’s not the whole story either. The type of CBD oil, or getting the wrong sort of oil by mistake, can also mean you fail a drug test. Plus, there’s another reason why you could fail a drug test when using perfectly legitimate CBD oil that I will talk you through.

So let’s take a quick look now at how CBD oil could trigger as a false positive on a drug test, and what you can do to stop that happening.

When Could You Face A Drug Test?

CBD oil is meant to be drawn from hemp plants low in THC, so it is without the psychoactive substance THC. You can take it as much as you want, and it won’t get you high. But you will still benefit from its interaction with the endocannabinoid system because of the CBD content, potentially bringing a range of benefits like calmness, pain relief, and better regulation of anxiety signals. 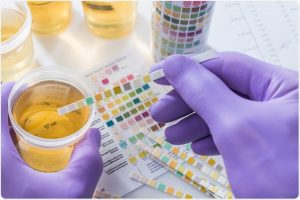 So you wouldn’t think that facing a drug test will be a problem if you used CBD oil? But unfortunately, that’s not the truth at all.

You could face a drug test at work. On the job drug testing is getting more common. Or, you could face a pre-employment drug test. Those are the two most common times. But it could also be for insurance purposes, or law enforcement purposes more rarely.

But actually it doesn’t matter when you could face a drug test, it’s knowing that you won’t fail it that is important.

What Sort Of Drug Test Would Pick Up CBD Oil?

The bad news is that even the most basic five panel drug test looks for cannabis metabolites. That means it doesn’t mean how many panels on the drug test, you will be tested for the presence of cannabis waste products.

So it doesn’t really matter what sort of drug test is, because even the most basic drug test could pick up a false positive if you meet the criteria for doing that.

Part of the problem is that CBD oil, and even hemp oil which does not contain much CBD, can still contain traces of THC.

So if you are taking CBD oil, or even hemp oil, that does have close to the legal limit of THC, and you are dosing very highly, then it is possible to trigger a false positive.

Some people don’t really know what doses to take, and other people have to take high doses to cope with the condition they are trying to use it to deal with, which means that they may be consuming far higher amounts of THC than they realize.

In one study, it was documented that 15 test subjects consumed CBD and hemp oil products that had up to 0.6 mg of THC in them. They did this over 10 days.

They then did a urine sample drug tests. It was found that some people on lower doses didn’t reach the 50 ng/mL cut-off point for a drug test displaying a positive result for cannabis metabolites.

However, seven of the subjects who had taken 0.6 mg of total daily dose of THC within CBD oil, did pass that cut-off threshold, and tested positive for THC metabolites.

In hemp oil, which usually has a far lower amount of THC in it, that equates to around 300 mg daily dose. Very high doses that few people would ever reach.

So although it is possible for you to test positive for cannabis use on a high dose of hemp oil CBD oil, because of the size of the doses needed, it’s quite rare that that would happen.

What’s going on then, as more people do test positive than those results would suggest as a proportion of the population?

As well as the concentration of THC in the CBD oil you are using (forget hemp oil you should not be using that because it CBD concentration is very low), it’s also about some people getting confused between the types of oil there are.

You then have cannabis oil. Which has high concentrations of CBD, but does have more than the legal limit of THC. It’s usually only available on prescription, or in places where cannabis is legal. Taking enough of it can get you high.

Then you have actual CBD oil. Which is high in CBD, but well below the legal limit for THC.

The problem is that some people buy cannabis oil because they have mistaken it for CBD oil. So they are getting far more THC at even a moderate dose than they should. So it pays to make sure that you know exactly what the oil you are buying is.

There’s also another thing going on here as well. Because people using CBD oil tend to be using it for pain relief, often, they are smoking cannabis as well for medicinal purposes, even if it’s done through self-medication.

Because THC metabolites (the main one being THC-NOOH) can be detected for a week or more, and in chronic users for up to a month or even longer, taking CBD oil, even alongside the odd joint each week, can top up the levels metabolites to a level that would be detectable.

In effect, although a week after you smoked your last joint you should in a lot of cases be clean, because since then you been topping up with CBD oil that contains THC, your body is not getting rid of enough metabolites to actually test clean.

How To Hide The Smell Of Weed In Your House & Car

How Long Does Weed Really Stay In Your System?