UEI Kratom: Is Ultra Enhanced Indo Worth It?

For any EUI kratom review to answer the question around if Ultra Enhanced Indo is worth the extra price, it’s got to explain what ultra enhanced kratom actually is.

And that’s where the first problem comes because there are a couple of different ways of people claim ultra enhanced kratom is made. But I’ll explain those methods here, so you can make your own judgment.

The Difference Between Regular And Ultra Enhanced Kratom

This is where it gets tough because the process of making ultra enhanced kratom is a bit cloudy.

People get confused between kratom extracts, and ultra enhanced kratom. There’s also confusion around how the two different types are produced.

Kratom extracts are produced by using more to make the same amount of kratom powder. So for example, a 10x kratom extract uses 10 times more kratom leaves than normal, to create one gram of kratom powder. It’s boiled down into resin, and then when the density required is reached, it’s ground into powder.

That’s pretty straightforward, but it’s ultra enhanced kratom that gets confused with extracts and could be linked to in terms of how it’s sometimes made.

Ultra enhanced kratom is made by boiling down the kratom into the resin, just like with extracts, to make a very concentrated form of kratom. But then, additional alkaloids are meant to be added to it, up to 1500 mg of additional kratom alkaloids per 25 g of powder.

But where those additional alkaloids are extracted from is always a mystery. Manufacturers claim they are not artificial, but extracted from kratom, but how do they do that, what’s the process, nobody knows.

But what is true, is that Ultra Enhanced Indo kratom uses a more concentrated process of production, which results in a far stronger, more alkaloid rich, kratom powder.

The other mystery around UEI kratom is that it’s not red, green or white. It’s just Ultra Enhanced Indo.

So it seems to be produced by just using Indo kratom leaves, that are dried out in a standard way, and then turned into ultra enhanced. You see, the main way that red, green and white traits are produced, is in the drying process, but it appears that this is not done to produce a red, white or green, with Ultra Enhanced Indo, it’s just powerful kratom.

Which means, depending on where you get it from, you’re going to have to try it, to find out where the predominance of effects lay.

But, UEI kratom is full spectrum. That means you’ll experience all of the effects of kratom:

Now obviously, as you can see, some of those effects are contradictory, but kratom is a full spectrum drug, and it’s the dose which helps to dictate the effect you experience.

At a low dose, UEI kratom effects will be massively uplifting. You’ll get tons of energy, a surprising cognitive improvement, and you’ll feel really happy and positive.

As the dose increases, you’ll probably start to get that kratom high, euphoria, that the higher the dose is, will tip more into overwhelming relaxation, pain relief, and eventually sedation.

If you get your hands on genuine, pure, Ultra Enhanced Indo kratom, then not only are you going to experience really powerful UEI kratom effects, but you’re also going to need a smaller dose than normal.

With UEI, you knocking a gram off at the lower dose range, and a couple of grams of further up. What I mean is, your initial dose should just be a single gram of UEI, and an overwhelming dose could be as low as five grams.

So in terms of Ultra enhanced Indo kratom dosage, tread carefully is my message. Plus, because it’s powerful, taking a stronger dose, could build up tolerance quickly. Kratom tolerance is a real thing, and it’s where your body and mind get used to the dose, requiring a higher dose to get the same effects, Ultra enhanced kratom could trap you in that far quicker than normal kratom.

Why Ultra Enhanced Indo Is Popular

There are a couple of reasons why UEI kratom is so popular, and any fair UEI kratom review has to cover both of them.

The first reason is that it’s more powerful if you can find real UEI kratom. That’s the most obvious reason, and it’s why people try and find it.

At lower doses, it means less powder to take, and it means to experience powerful effects, you also need less powder.

But the second reason it’s so popular, especially in the online discussion, is that it’s difficult to get hold of. So there’s an element of chasing the gold at the end of the rainbow here, with people looking to experience that powerful UEI kratom feeling that they get told about. 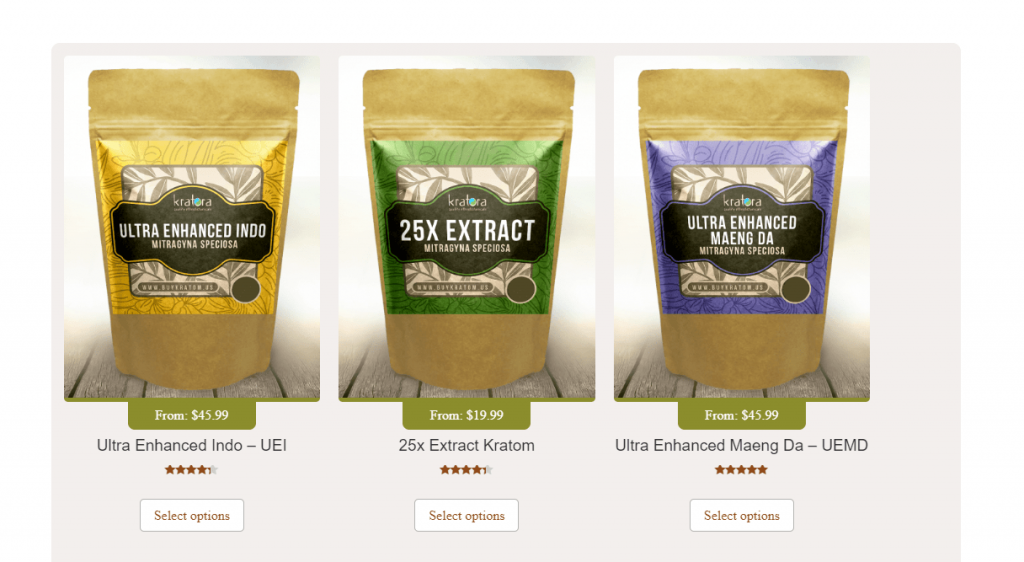 The problem with Ultra Enhanced Indo kratom, is that it’s very difficult to get hold of any genuine stock.

The original UEI kratom that used to be imported, doesn’t exist anymore, because they were problems with it. It was reputed to have actually been enhanced with real opiates, and when that was realized, people stopped importing it into the USA in case they had the DEA knocking on their door.

So now it’s all about the proportion of kratom alkaloids, and finding a company who has got a genuine import route, who then test it, and can guarantee its quality, is rare.

I’ve tried a few different UEI kratom vendors, and two of them were awful. Both of them are very popular, and they are both on the first page of Google searches for all the obvious keywords.

Another one was okay, but that business went down the river about a year ago. So that’s only left me with one place to actually get my hands on genuine UEI kratom now.

BuyKratom.us do Ultra Enhanced Indo kratom pouches, that are good value, and incredibly strong. I can only cope with less than a handful of grams of this stuff, before it sends me over the edge into unbelievable energy and euphoria, that eventually, especially at a higher dose, tips over into me basically just dropping out and laying around feeling full of bliss.

For beginners, they also do an extract + enhanced variety pack. This will get you a pouch of UEI kratom, plus 25x and 50x kratom extract packs as well. That gives you a cheap, easy way to experience the power of extracts and ultra enhanced kratom, and to compare them, all with one purchase from BuyKratom.us.

But the conclusion of my UEI kratom review has to be one of caution. If you’ve never tried it before, start with a single gram, please. You might be glad you did.