Red Malay Kratom: Is It Good For Pain Management?

People often say that Green Malay kratom is the best all-rounder you can try. So in this Red Malay kratom review, I want to tell you about how it’s sister kratom matches up.

I’ve had some experience with Red Malay, and I’ll be honest, it’s now one of my favorite strains of kratom, right up there with Green Malay. So in this review of Red Malay, I’ll tell you why that’s the case, by telling you about the exact Red Malay kratom effects that make me love it so much.

Green Malay is a great all-round kratom. It’s euphoric, offers a bit of pain relief, delivers a great boost in energy, and lifts your mood magnificently.

Red Malay is actually very similar in nature, but with a tendency a little more towards the classic traits of red kratom.

I’ll explain the exact Red Malay kratom effects in a moment. But suffice to say, green and red are very similar, and between them, you can get the perfect blend any time of day, state of mind, or occasion.

As I’ve said, Red Malay kratom effects are actually very similar to green, they really are like sisters, but with red obviously tending towards the traits of red kratom slightly. But it’s not overwhelming. For me, Red Malay offers great pain relief, and will really chill you out. While at larger doses, it’s really opiate-like, warm, rich, giving a deep and compelling high.

But interestingly for me, just like green, you’ll still retain energy and focus until you get to a really high dose. Some red kratom strains really mong me out, but that’s not the case with Red Malay, it retains a little boost, a little focus, even at what I would call a significant dose.

I get sciatica, which is crippling in the evenings, especially when I’m sitting down or laying down. I found that just a couple of grams of pure Red Malay takes that pain away and actually helps me to sleep.

But what’s great about Red Malay is that you’ll retain energy and focus. Even at around 4-5 grams, I have found that I can still focus properly, think properly, I have normal energy levels, and I feel really upbeat. But it’s mixed with feeling really chilled out, and feels like I’m drifting, with the pain vanishing within an hour of taking it.

Red Malay kratom dosage is really difficult to tell you about. The thing is you see, kratom is very personal.

Whether you have eaten, your weight, your height, your mental and physical health, the quality of the kratom, how much you take, when you take it, all of these things feed into the Red Malay kratom effects you will experience.

But talking generally about Red Malay kratom dosage, a couple of grams is a light dose. That should start to relieve the pain, chill you out, but keep you focused.

Up to about five grams or so, you’ll actually feel energetic, focus, positive, pretty damn good. Plus the pain relief and relaxation will be significant.

At higher doses, things are more difficult to predict. You could continue on the trend I’ve just talked about, or you could start to feel overwhelmingly chilled out, sedated, and unable to do much at all. So tread carefully and work up a dosage ladder. 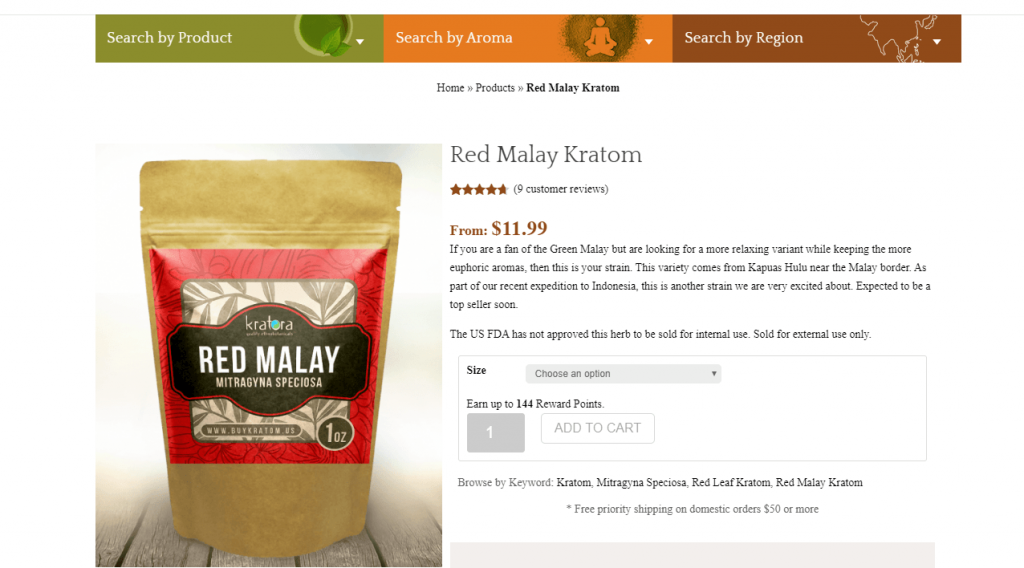 I want to finish this brief Red Malay kratom review by telling you about a couple of places that certainly deliver 100% pure kratom.

The first is BuyKratom. They sell exceptional pure Red Malay kratom powder. Bitter, earthy, wonderful. They also do a red kratom variety pack, as you can experience the effects of Red Malay kratom alongside six other types of red kratom, so you can really feel the difference.

The second place is TheEvergreentree. Not only do they sell beautifully pure Red Malay kratom powder, but I also want to draw your attention to the fact they sell the same pure powder in capsule form (TheEvergreeetree sells over 30 different kratom strains!!!).

For me, capsules are brilliant for beginners because you can dose exactly. No worrying about loose powder getting everywhere, no weighing it, it’s discreet, and you don’t have to worry about the taste of the kratom, perfect for getting to know Red Malay kratom.