All You Need To Know About Quest Diagnostics Drug Test Procedures

Although there are a variety of reasons why you would face a drug test, employment drug testing is by far the most common reason why people have to submit samples of urine, blood, saliva, or hair. As the second biggest drug testing company, it’s important to understand everything about the Quest Diagnostics drug test you could face.

So you can consider this a rapid five-minute guide to everything you need to know to understand and pass a Quest Diagnostics drug test. You’ll learn about what happens when you go to Quest Diagnostics to take a drug test, exactly what the process is for getting drug test results from Quest, and the cut-off levels they use.

On top of all that, you’ll also learn about how you can get around a Quest Diagnostics drug test if you are facing one and know that you have drug metabolites in your body.

All You Need To Know About Quest Diagnostics

Quest Diagnostics is one of the biggest testing labs in the USA, in second place behind LabCorp for the sheer size and number of tests conducted.

They are used by thousands of employers across the continent, and they are also used by government agencies who are required to do federally mandated drug testing on new and existing employees.

Because they test federal employees (and companies contracting services to the federal government), they have to be certified to the standards of the Substance Abuse & Mental Health Services Administration (SAMHSA).

So if you work for any federal agency or state agency, or for something like the Department of Transport, or you’re even a contractor to a federal or state government, then you could face mandatory drug testing that is conducted through attending a Quest Diagnostics test center.

Let’s now talk through what happens when you go for a Quest Diagnostics pre-employment drug test. This is pretty much the process for any other types of drug test that Quest undertaken (hair, saliva, urine, blood, but overwhelmingly for employment purposes, it’s a urine sample testing that is most common.

Having said that, I know for a fact that Quest Diagnostics are currently really pushing hard for mouth swab testing. They claim that it’s harder to get around because the sample is administered by one of their technicians with no way of avoiding the sample being taken accurately. However, that ignores the fact that you can neutralize your saliva to get around it completely (I’ll talk to you about that later). I suspect there really pushing for it because it’s cheaper to do and they make more profit.

So here’s the process for undertaking a Quest Diagnostics urine drug test:

The whole process is pretty straightforward and usually takes about 15 minutes from the point that you check-in, unless there is a backlog, but it is rare because appointments are scheduled in advance. 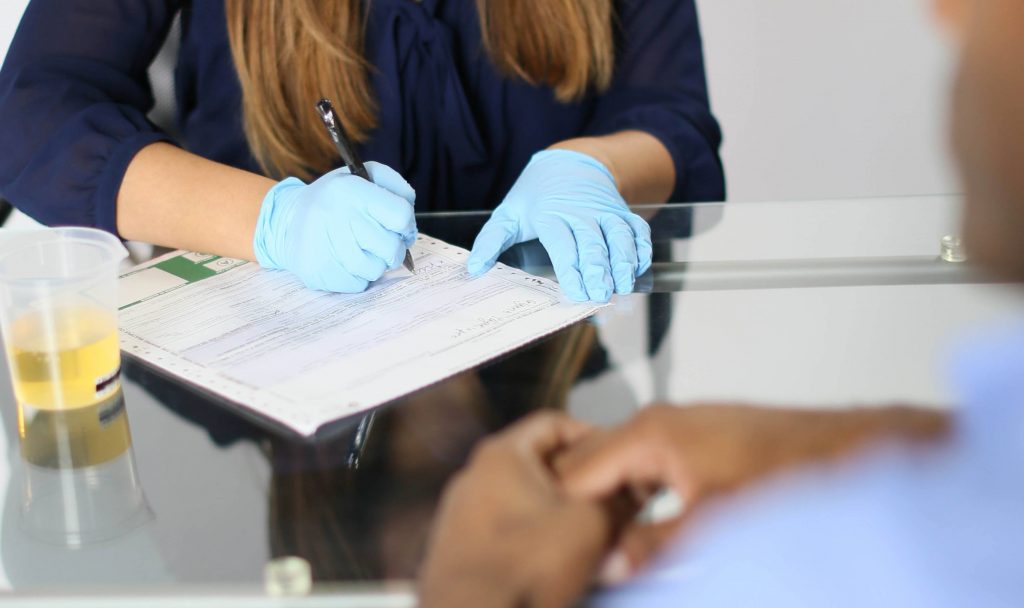 Your sample is then put through some initial tests. These tests will detect if there are drug metabolites in the sample or not. They will also check the sample is valid, meaning it will be checked for the presence of chemicals found in urine.

At that point, if there are no metabolites found and it’s a valid sample, then in as little as four hours, the person who commissioned the test could receive an email or text telling them that the result was negative.

If drug metabolites are found, then it has to be subjected to full gas chromatography – Mass spectrometry analysis. That’s where your sample is forced into a gas format and tested against the various panels that the person commissioning the test has requested (usually five panel test, but some states require federal employees to do a 10 panel drug test).

But don’t panic if you haven’t heard back within 24 hours or so, it doesn’t mean that your drug test has failed. It just means the results haven’t been sent yet. But within 48 hours, you will know if you have passed or failed. Having said that, sometimes the employer gets results and they don’t even tell you if you passed or failed, they just continue with the recruitment process, or they terminate it.

The Quest Diagnostics drug test cut-off levels are pretty industry-standard and based around the minimum criteria stated by official federal government requirements. This is laid out in government legislation both federal agencies and government contractors.

These are the cut-off levels for a five-panel drug test:

How To Pass A Quest Diagnostics Pre-Employment Drug Test

Let’s quickly finish this guide by telling you how to pass a drug test if you know that you’ve got drug metabolites in your body.

You won’t know how long it’s going to take you to get clean. But if you have taken anything in the past three or four days, and you’re facing a urine sample drug test, then you are at risk. If you are a heavy drug user, several times per week, then even if you’ve had a week’s break, you could still test positive, especially for cannabis use.

Here are the ways that you can cheat a Quest Diagnostics pre-employment drug test:

Why Choose CBD Capsules and Where to Buy