This Qcarbo32 review is going to talk about one of the most popular detox drinks on the market. But does Qcarbo32 deserve to be so popular, or is it stitching people up during a drug test?

To answer the key question, I’ve put together this review of Qcarbo32 based on my own experiences, the experiences of people I know, plus talking to people who I trust online as well.

I’m going to tell you the truth about Qcarbo32, whether it’s worth the money, and whether you should risk using it to pass a urine test. I’ll also talk about some alternatives to Qcarbo32 detox that you might want to consider.

What Is Herbal Clean Qcarbo32?

Qcarbo32 is a well-established detox drink. Just to be clear on what a detox drink is, it doesn’t actually detox you at all. That’s a fallacy from the name.

When you drink a detox drink, the combination of the liquid and the ingredients in it flush your bladder and urinary tract clean of drug metabolites. To keep your urine sample natural, they also contain nutrients and other ingredients that keep the balance and look of the urine correctly.

But obviously, within a few hours, any drug metabolites still in your body will start to seep out into your bladder again. So a detox drink actually just masks the fact you are carrying toxins in your body for a few hours, so that you can submit a clean sample.

Qcarbo32 works in the same way as all the other detox drinks. The combination of ingredients is meant to give you a clear zone up to a handful of hours, during which you will not have drug metabolites in a urine sample.

Qcarbo32 is the big brother of the family. The other products are Qcarbo20 and Qcarbo16. Oddly, they all have slightly different ingredients, which makes it even more confusing for me, because if you have a formula that works, why is it altered across the product range? 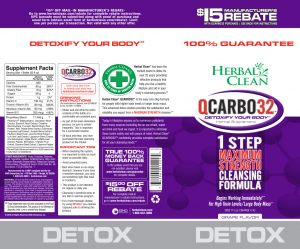 The Qcarbo32 detox drink ingredients list is long, and I’m not going to write them all out here, as most of them are just filler ingredients, the look, taste, and preservation.

But some of the key ingredients include creatine, fiber, pectin, plus vitamins and minerals.

Now as you can see, it contains creatine, which is present in human urine. So it is replacing what is lost when the drink flushes you out, so the sample will appear natural. The vitamins included in the drink will also help to keep urine the right color

As you can see, it also contains pectin and fiber, both of which can generate bile, which can then attach THC metabolites to it, and aid a speedier exiting of the body.

But generally, Qcarbo32 ingredients concern me. Most of the ingredients have nothing to do with detoxification at all, and there seem to be certain key ingredients missing from this detox drink, that are present in the three brands that I use myself.

The other point to make is that the main active ingredients relate to THC. For example, the main ingredient is cayenne pepper, which the company claim can help to release THC from fat cells.

However, that ignores the main point that you drink it, and then two hours later you submit your sample. There’s literally no time for the drink to interact with fat cells to release THC and then get them out through the urinary tract.

So the whole premise of some of the main ingredients simply doesn’t add up.

Qcarbo32 Instructions For Use

Qcarbo32 Instructions are the same as pretty much every other detox drink on the market:

You should then have toxin free urine for up to 5 hours, as long as Qcarbo32 detox has done its job properly.

Does Qcarbo32 Review: Does It Work?

Now obviously, this is the million-dollar question. No serious Qcarbo32 review could ignore the key question around whether it works consistently or not.

My verdict comes from my own experience with testing it at home. I followed the instructions that I outlined above exactly, and I then used two home test kits, one hour after taking it, and two hours after taking it.

Both of those urine sample home drug test kits showed as positive for marijuana. I had smoked marijuana three days before, and then stopped. So for me, Qcarbo32 failed, it simply did not work in the way it should have done.

I also know two people who have failed real pre-employment drug tests using this detox drink, both in the past six months. Plus looking online, and talking to people I trust in Facebook groups, things like that, I’m also hearing lots of anecdotal evidence that Qcarbo32 detox drink is letting people down.

However I also know people who have successfully passed with Qcarbo32, you can read some positive Qcarbo32 reviews online, so if I wouldn’t say it’s the worst detox drink on the market, but not the most reliable for sure.

If I was generous, I’d say it’s a toss-a-coin situation, you probably have about a 50% chance of success, as long as you are a light user.

Now part of the problem is it’s marketed so widely. This means that because it’s easily obtained because you can buy Qcarbo32 in Walmart, a lot of people are talking about it.

I think that’s part of the problem. Although there are loads of negative Qcarbo reviews, because there are still a lot of positive reviews out there from people who got lucky, it is keeping the reputation of Qcarbo32 afloat, when it really isn’t good enough for anything but a very light user. 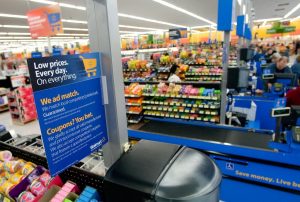 Look, if you are short on time, you get caught out, then you can grab a bottle of Qcarbo32 in Walmart, and it will be better than nothing. But you are taking a massive gamble.

It would be far better to get your hands on one of the professional quality detox drinks that you can only get from specialist online retailers.

For me, there are two detox drinks which are infinitely superior to Qcarbo32: 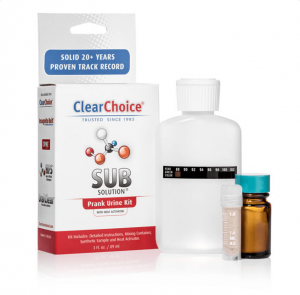 But look, the conclusion of my Qcarbo32 review is actually twofold. Firstly, it’s not a good enough formula to pass a urine drug test with confidence. Secondly, you can buy Mega Clean in Walmart as well, so I’d suggest you buy that if you’re desperate.

And thirdly, there’s just no need to put yourself in that position. Buy yourself a decent bottle of one of the recommended detox drinks I’ve outlined, and you know you’ll be safe.

But the final part of this review around Qcarbo32 detox is to suggest you don’t use detox drinks at all. Although they are high-quality they do result in a higher risk of failure, compared to using synthetic urine.

A good quality synthetic urine like Sub Solution will definitely pass validity testing, and as long as you have kept it at the right temperature, then it’s a 100% guarantee on passing, which you obviously have to then balance up against the risk of smuggling into the testing lab.

But the thing is, simple drug tests, like pre-employment ones, legally have to be unsupervised. So as long as it’s a discreet container, then there’s literally no problem with smuggling in, you won’t be searched that intensely, they can’t touch your private parts, where you could stash the bottle, by strapping it yourself.

To read more about synthetic urine and how it can pass a drug test, click here.