What Is Pterostilbene: Benefits, Dosage, Possible Side Effects

I’ll tell you what pterostilbene is, where it comes from, and how to use it. We’ll talk about pterostilbene benefits, dosage, potential side-effects, and what other supplements it can be used alongside.

I’ll also compare pterostilbene to the far more well-known natural health supplement, resveratrol, so you can see how the two compare. There is a real market behind selling resveratrol supplements, but is it justified?

I’ll also tell you where you can buy pterostilbene supplement that’s high-quality and will allow you to safely experiment with this potential life-changing all-natural supplement.

Pterostilbene is a polyphenol, a chemical found in plants from the class known as stilbenoids. These are antioxidant chemicals produced by plants to help protect them from attack, especially for things like fungal and bacterial attacks.

It’s similar in structure and function to resveratrol, which is found in the skins of red grapes. In fact, for a while, it was thought that resveratrol was the reason for the “French paradox” where high-fat diets did not produce shorter lifespan. However, recent research has started to question that connection.

Because of the focus on resveratrol, pterostilbene has flown under the radar for several decades, only becoming the focus of study in the past decade or so.

Pterostilbene is found in blueberries, as well as other small berries and some types of nut. So it’s already readily available, but the concentrations are low compared to what scientific study seems to be suggesting the dose should be to have the range of benefits people are exploring.

The range of benefits that pterostilbene could potentially have are quite significant, so it’s worth going through them in detail right here for you.

In one study from 2012, admittedly only on mice, mice that had been specially bred to be vulnerable to Alzheimer’s were treated over a long period of time. Interestingly, it was found that pterostilbene, but not resveratrol, lowered instances of Alzheimer’s in the group being fed pterostilbene significantly when compared to the control group.

Until recently all the focus has been on resveratrol. This is because it’s found in red wine, and was thought to be the reason that French people were living longer, despite having fatty diets that should have killed them early.

Both are strong anti-inflammatories. This ability also inhibits COX-2 proliferation, which at lower levels is associated with a lowered risk of cancer and dementia. Both supplements have been shown to potentially inhibit cancer cell growth. However, this research is only in its early stages.

Pterostilbene and resveratrol are both strong antioxidants. However, antioxidants are now being found to be something of a “red herring” in terms of longevity. Although they can be beneficial, they are not the lifesavers they were once thought to be.

So they are very similar. However, it’s been found in modern studies that pterostilbene performs better in all of the metrics we have just discussed. 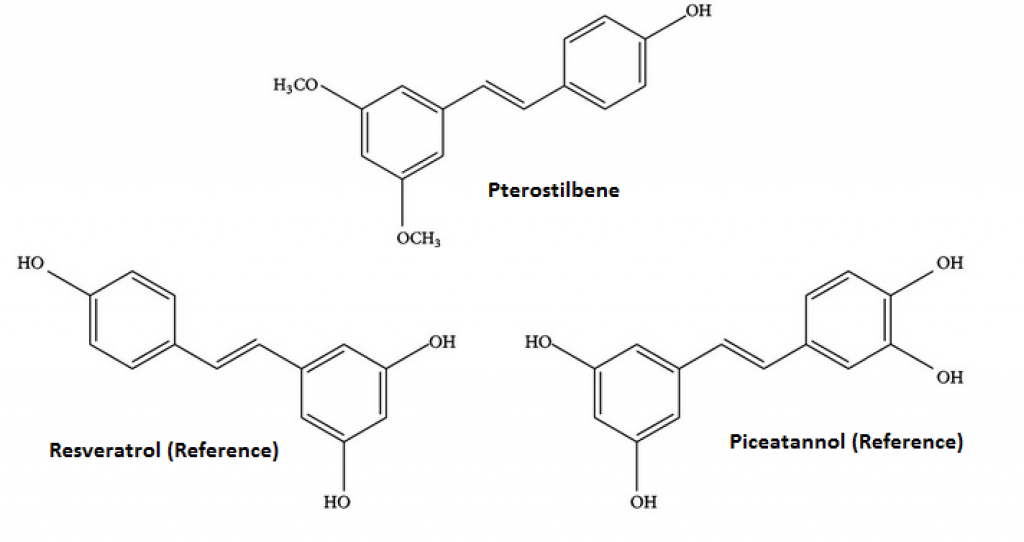 If you’re going to experiment with taking pterostilbene then a supplement is the best way to go. There are plenty of pterostilbene supplements on the market, some better than others.

It’s all about the quality, and the dosage. I’ll talk about the dosage in a little while, but you really need to find pure pterostilbene supplements to help you get the most out of experimenting with this potentially miraculous natural chemical.

This is especially the case if you’re thinking of using pterostilbene to try and help regulate type II diabetes.  Pterostilbene has been found to help regulate insulin sensitivity, stopping it from producing more insulin than it should. But you need a good quality pterostilbene supplement to make sure they stand the best chance of lowering your blood sugar levels.

People often search for “nicotinamide riboside pterostilbene”, wrongly thinking that it’s the same thing. However, they are not the same supplement but can be used alongside each other.

Nicotinamide Riboside converts in the body to something known as NAD+ that can be really beneficial with slowing down the aging process.

Also called niagen, nicotinamide riboside is a variant of vitamin B3. In the body converts into NAD+, which is known as a helper molecule, as it can support many key biological processes that deteriorate with age, things like repairing damaged DNA.

So it’s perfectly possible to take nicotinamide riboside and pterostilbene alongside each other to get the best benefits overall. Both are safe, naturally derived, and there is absolutely no evidence that they can have anything other than good long-term benefits. If you are aging, or want to help your body to fight off DNA deterioration and other problems with getting older, then it could be the perfect combination for you. 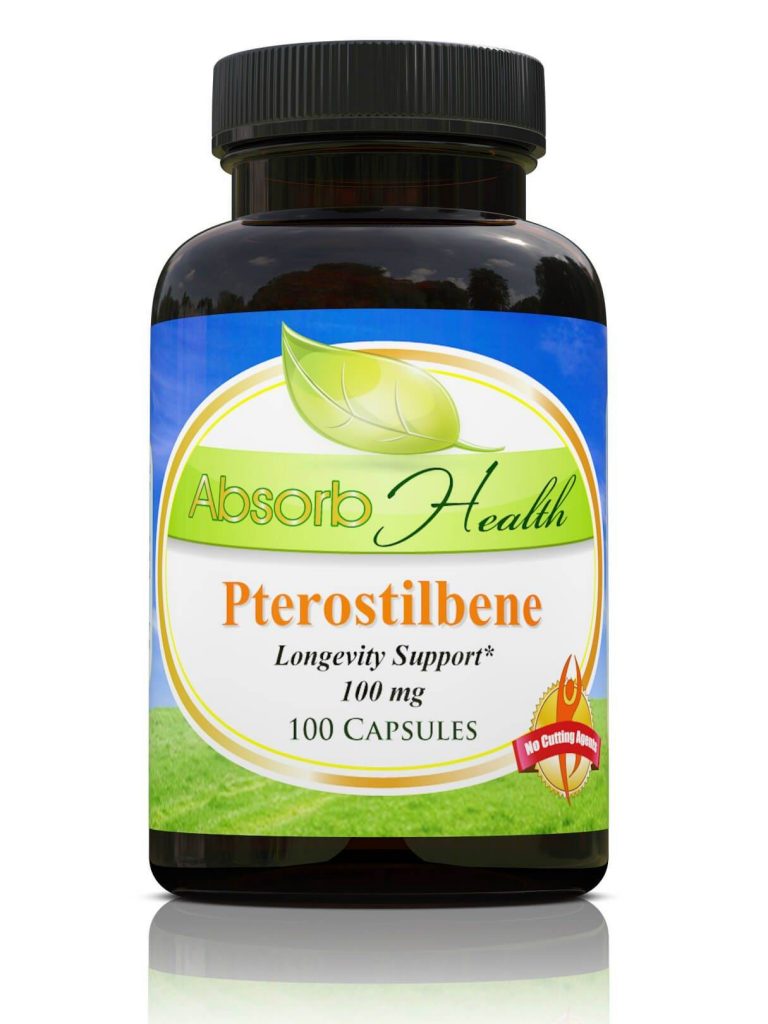 I’ll also mention here that some people are saying they’ve lost weight using pterostilbene. It’s only anecdotal and based on a few animal studies, but it does appear to have some basis in fact, so you could lose weight taking a pterostilbene supplement.

But what sort of pterostilbene dosage should you be looking at each day? In trials, doses of up to 250 mg per day have not shown any side effects or signs of toxicity. However, that’s probably still a high dose.

Online, most people seem to advocate the dose of around 100 mg per day as a maximum. That’s certainly the level I would start at if I was going to use this supplement.

The reason I wouldn’t go any higher is that there is anecdotal evidence that higher doses of pterostilbene can raise LDL cholesterol levels. Although at lower levels like 100 milligrams per day that’s not really a problem, if you are hitting 250 mg per day then that’s a significant increase, especially if you have high cholesterol anyway.

Where To Buy Pterostilbene

So there do seem to be some significant potential pterostilbene benefits. As you’re undoubtedly interested in its potential, let’s talk about where to buy pterostilbene supplements.

Absorb Health is where I buy nearly all my supplements from, and pterostilbene is no different.

For just $17.99 you can buy 100 pterostilbene capsules, each with 100 mg in them. This fits well with the maximum recommended dose that people seem to advocate.

You’ll get free shipping in the USA on orders over $75, and a full moneyback guarantee. Those are the other reason why always ordered from Absorb Health because you get a great deal, and they sell all the different types of supplements and nootropics you could ever wish.

Perhaps if you have slightly high cholesterol, you should make sure you get yourself checked out before you start using pterostilbene supplements, and then three months later to see if there has been a change.

But overall, pterostilbene benefits seem to outweigh any potential side effects, and it’s definitely a low-risk way of experimenting with preventing the onset of several of the key problems we all experience as we get older. 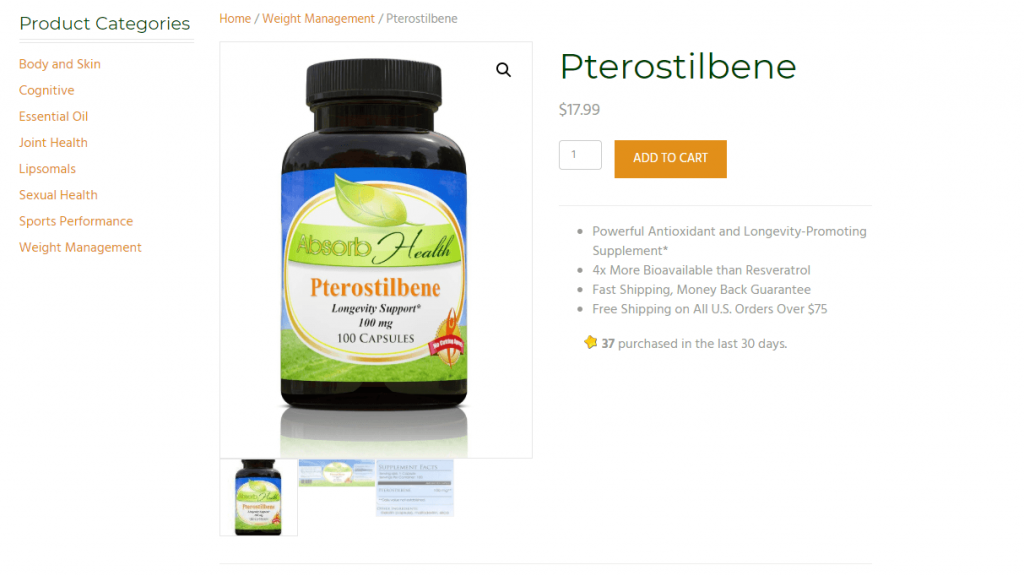 How to develop healthy relationships when recovering from alcohol addiction