Nutra Cleanse Fail Safe Kit reviews claim this is the most potent detoxification product that you can buy right now.

In this full review, I’m going to work through the claims by looking at the ingredients and instructions for using the Failsafe Kit, to see if the big claims stack up.

There are some misconceptions about detoxification kits generally that I want to clear up here as well. You’ll definitely understand where this falls in the spectrum of available detox products.

As well as full review of the pros and cons, I’ll also cover some other ways that you can pass a drug test at short notice.

What Exactly Is The Nutra Cleanse Fail Safe Kit?

Is this a permanent detoxification product? Will it get you completely clean for good?

The answer is simply no. This is the six hour kit, meaning it could keep you clean for up to 6 hours. The five day kit, as the name suggests, takes up to 5 days to push toxins out of your body and leave you permanently clean.

So this is not a true detoxification product at all. It’s really a masking agent, and the combination of the pills and the liquid you get are a glorified detox drink.

Are The Claims Made About The Failsafe Kit Realistic?

The Nutra Cleanse Fail Safe Kit claims to only take 60 minutes to get you completely clean and also that its effects last for up to 6 hours.

Let’s say right up top here but that’s very unlikely. It claims to be the strongest on the market, aimed at those who have “extreme exposure to toxins”. From that, you have to assume they mean daily weed smoking or very frequent high-dose drug taking. So the six-hour clean is an absolute nonsense claim. Make no mistake about that.

Any masking agent product can only work for the length of time it takes for new toxins to be processed by the liver and kidneys, and work their way back into your bladder.

A detoxification kit like this flushes out the toxins in the kidneys and urinary tract and replaces it with fresh liquid that appears balanced.

But as soon as fresh toxins appear in your urine, you will test positive again. Claiming anything could keep you clean for six hours with extreme toxin levels in your body is pretty funny.

The instructions for using the Nutra Cleanse Fail Safe Kit are pretty convoluted if I’m honest.

I’ve used detox drinks of high potency. You simply drink them, urinate several times, and they will keep you clean for two or three hours to submit a drug toxin free sample.

These are the instructions you have to follow over 60 minutes for the Nutra Cleanse Fail Safe Kit: 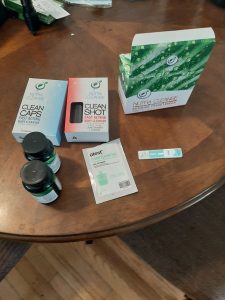 As you can see, compared to just drinking a bottle of detox liquid, it’s quite a convoluted process.

But if it works, then it’s worth the effort. But does this failsafe kit actually get you clean?

I have several concerns that made me suspicious:

Overall, I think this will leave your sample potentially diluted. It’s one hell of a lot of liquid to be drinking so close to your drug test, and there just isn’t enough in the kit to replace what you are pushing out (things like vitamins, minerals, and creatinine).

Other Ways You Can Pass A Drug Test

The conclusion of my Nutra Cleanse Fail Safe Kit review is that those reviews claiming it’s the best product out there are lying to you to get you to click through and buy it.

This thing costs $90. That’s very expensive when there are far less risky ways of passing a drug test that is cheaper.

You are at risk of having a diluted sample, and you are spending a lot of money for the privilege of finding out if it works or not. I’m not saying it doesn’t work. It could. But if you are a heavy and regular user, then this is not the best option for you.

For me, there are three better, and proven ways to pass a drug test at short notice.

Toxin Rid is the most potent detox pill on the market. It won’t get you clean on the day; it’s not designed for that. But if you got a week’s notice, then it (the seven or 10 day course) is perfect alongside a natural detox to get you genuinely clean to pass a urine test.

If you haven’t got that much time, you can buy a short course length, and then use that alongside natural detox to push out as many toxins as possible over the two or three days before your test. Then on the day of your test, you can use a high potency detox drink to mask the remaining toxins.

So it’s not an instant solution, but it’s far more certain than using either of the Nutra Cleanse products. You can purchase Toxin Rid straight from the manufacturer.

If you’re looking for a detox drink that really works, then Rescue Cleanse is the one I would go for. I’ve used it twice, and it’s got a great track record.

Rescue Cleanse only costs $55, so $25 less than the failsafe kit. Also, it’s just a simple 32-fluid-ounce drink. It’s a high potency, and you don’t need any additional water either.

So there is no chance of you getting caught with a diluted sample, you aren’t chugging back tons of water, you aren’t taking 16 pills; it’s just a straightforward drink the liquid and then urinates three times process.

If you are facing a drug test at short notice, then this is simply the easiest way to get the exact same results as you could with the far more expensive and less certain failsafe kit.

If the drug test you are facing is unsupervised (meaning there is nobody in the room with you when you submit the sample), then the best way to actually pass is to use synthetic urine.

People panic about using fake urine because they think they will get caught carrying it, or that it simply cannot fill modern drug testing.

Both of those are completely wrong. As long as you tuck the sample in your crotch area, they cannot physically touch you there. They can pat you down, and they can make you remove coats and bags, but they can’t intimately search you.

Also, there’s a misconception about urine sample drug testing. It doesn’t get sent for some incredible digital analysis.

The immunoassay is basically a dipstick test, a panel test, that reacts on panels to certain drug toxins. It’s not actually that advanced, and only if there was huge suspicion about your sample, would you face a full digital analysis.

Sub Solution is the fake urine I would recommend you look at. Perfectly balanced, containing 14 things found in urine, it even looks and froths like it.

It’s discreet to carry, and you don’t need to worry about submitting it within the correct temperature range either.

It comes with a small bottle of heat activator powder. Simply tap in about one third of that in just before you enter the building, shake it until it dissolves, and it should bring it within the correct temperature range. If not, add a little more.

So it’s instant, hassle-free, and removes 95% of the risk compared to using the Failsafe Kit. One bottle of Sub Solution costs only $80, you can purchase it from the manufacturer’s webshop.