Home » Kratom » The Legal Status Of Kratom: The Plant That Cures Addiction, Anxiety, Pain and Much More
Kratom

The Legal Status Of Kratom: The Plant That Cures Addiction, Anxiety, Pain and Much More

Kratom is a completely natural drug that mostly grows in hot and humid places. You will find it grown in Thailand, Malaysia, Indonesia and other locations in South East Asia, but these are the three most popular places where it’s cultivated.

It’s mostly green in color and has similar effects to those of opiates or stimulants, depending on how much of it is consumed. If you take Kratom in lower dosages, it will act as a stimulant. However, on higher dosages, it starts to reduce pain in the body and shows its sedative side, helping users find rest.

In this article, we’ll show you the legal status of Kratom in the US and why we think it should be legal everywhere, so stay tuned!

The Legal Status of Kratom in the US

In most US states, Kratom is legal for consumption but it’s a question of how long that’s going to last since the DEA (Drug Enforcement Administration) and the FDA are actively looking for ways to get it banned.

They see it as an opiate that causes addiction and as something dangerous to the body. Although there is little to no evidence to support these claims, they still cling onto them. This poses a problem to millions of Americans that need Kratom to get through their pain, anxiety or other ailments that might have befallen them.

Luckily for them, Kratom at the federal level is still completely legal and only six states so far have made it illegal.

You would get into trouble for possession or use of Kratom in those six states.

You also have to be careful as Kratom is also banned in some cities in states where Kratom is completely legal. Those cities are Jerseyville in Illinois, San Diego in California, Sarasota County in Florida, Union County in Mississippi and Denver in Colorado.

As crazy as it sounds, even though Kratom might be legal at the federal and state level, if a city says no to Kratom, you have to obey the rules of that place.

If you’re from one of the six states or any of the cities mentioned above, you better find a way to get yourself out of there as soon as possible, because you don’t need that sort of prohibition in your life, especially not in the 21st century.

The funniest thing of all is that the US is one of the most liberal places when it comes to Kratom legality, as the plant is illegal in most countries where it is produced (what a contradiction) and in some European countries such as the UK and Italy. It is even banned in Australia, what a nightmare. 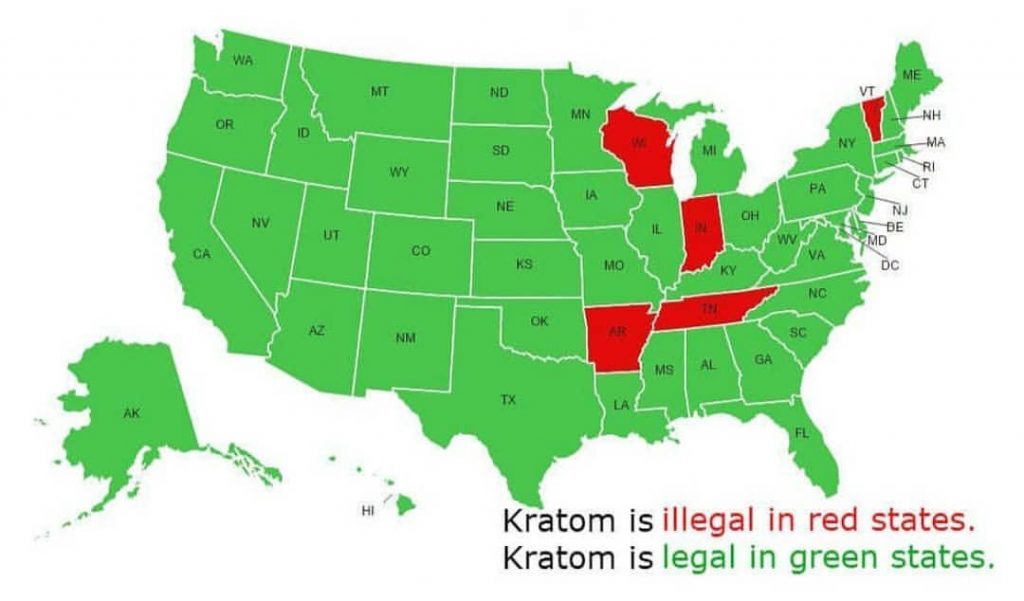 Why Kratom Should Be Legal

We can think of at least ten reasons at the top of our head. Kratom is a plant that has so many benefits to the human body that it’s quite mind-boggling how some states and even countries can proclaim it as illegal.

We’re going to list down the top reasons why we believe Kratom should be legal and we hope that by the end of this article, you will begin to share our sentiments.

Kratom Helps Addicts Get Off Opiates

There is an opioid crisis happening in America, with more and more young adults hooked on the nasty drug than ever. It’s not just our young people that are suffering, but disabled veterans that are in pain have also turned to opiates as their prescription pills either got cut or simply aren’t enough to wither away the pain.

You have normal citizens that haven’t even had a parking ticket in their life turn to crime to feed their heroin or prescription pill habit.

This is where Kratom comes in!

Kratom has had a long history of treating heroin addicts in South East Asia and the results were amazing: Most of the addicts never went back to heroin but stuck to Kratom, a much safer alternative. Since most addicts that have a heroin habit go back to the drug once the withdrawal symptoms become too hard to bear, Kratom comes in as a perfect substitute as it eases heroin withdrawal with its properties.

If you’re an active addict and want to know how to send your heroin addiction to the gutter, get yourself some Kratom and consume it in moderate to high dosages. You should take 10grams of Kratom at once and down it with some water.

The best strains for the job are Maeng Da and Indo.

While this might be the biggest reason why Kratom should be legal, it’s not the only one. As we’ll see shortly, Kratom has so many other benefits that one can only be in awe of such a potent and helpful plant. 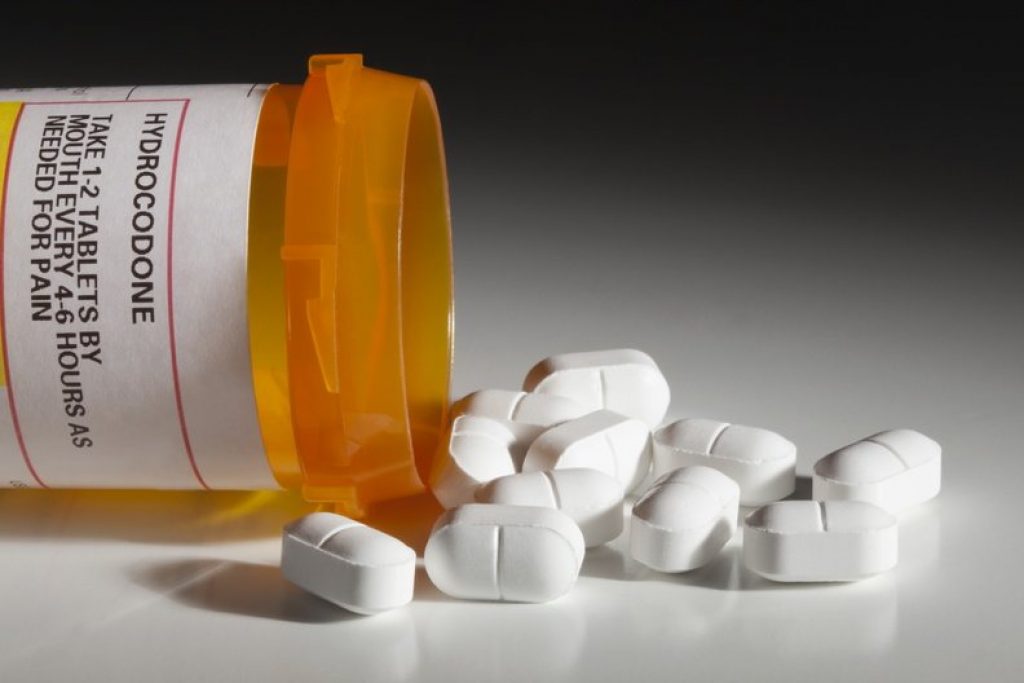 If you thought that the main cause for concern was the aforementioned opioid crisis, you have to see the statistics when it comes to the number of Americans suffering from anxiety.

As of writing this article, 40 millions Americans have an active anxiety disorder that is seriously causing them problems in their lives. Less than 37% of those afflicted receive any sort of help for their disorder.

Once again, Kratom comes to the rescue, as it acts as an anxiolytic.

The active ingredient in Kratom is called Mitragynine which binds to the opioid receptors in the brain, causing a feeling of calm and relaxation to the user.

Sufferers from anxiety report that their symptoms, such as rapid heartbeat, fear, sweating and restlessness all toned down once they consumed Kratom. This means that it is an effective way to combat anxiety in those afflicted with it.

It also changes your mood for the better, thereby influencing your thoughts and putting you out of the negative spiral anxiety sufferers find themselves in. Lastly, Kratom has sedative effects that can calm the user down and help him see his situation a lot more rationally, with a clear head.

The best strains for treating anxiety are Gold Bali and Green Malay Kratom. You should take it in moderate dosages when treating anxiety, 5 to 10 milligrams should be enough, the correct dosage depending on how severe the anxiety you experience is.

Kratom Relieves Pain in the Body

Besides an opioid and anxiety crisis, America is also faced with a prescription pill problem. With more and more Americans trying to find a way to soothe their pain, their medical doctors are being pressured into prescribing dangerous and very addictive pills such as Oxycodone.

Oxycodone has been shown to have a high potential for abuse and is partially responsible for the aforementioned opioid crisis. The problem becomes even worse when you considers that Oxycodone itself accounts for most of the overdoses on opioids and is one of the three most abused legal substances in America.

As previously stated, these pills turn normal citizens into hardcore criminals that are just trying to get their next fix. The pain these people experience is unbearable and one can hardly blame them for acting out or venturing into a life of crime.

Once again, Kratom can change all of that and that’s why it should be legal.

Kratom has been used for centuries to treat pain and it is a well-known analgesic. It’s by far one of the most effective pain relief substances on planet earth, yet it is still illegal in some places, can you imagine that?

Millions of users in need of an analgesic are left behind and forgotten, forced to fend for themselves.

Kratom relieves pain by reducing pain perception in the brain (all pain comes from the brain and its receptors) and it interferes with the signals being sent out to the brain from the afflicted area.

Although Kratom binds to the opioid receptors just like other opiates, it doesn’t cause addiction nor does it have any side effects because of the presence of Corynanthiedine, which is an opiate antagonist. The best strains for pain relief are Borneo and Maeng Da, they have the most potent effect on pain.

You can be very liberal with the dosage when it comes to pain relief. Depending on the severity of your perceived pain, you can take between five to twenty grams at a time. 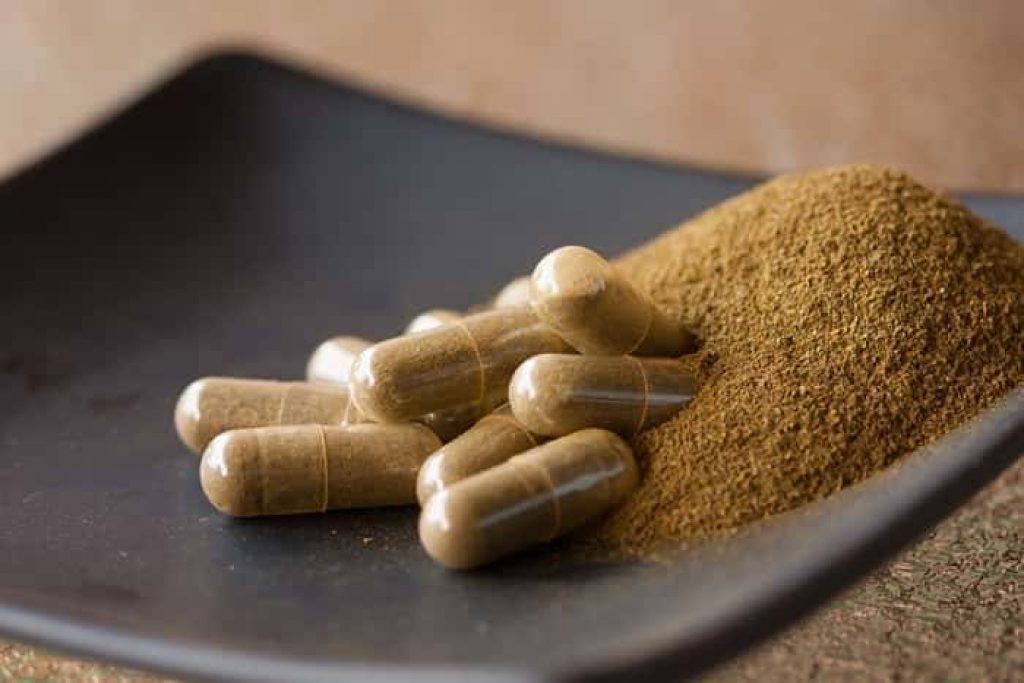 Our immune system is there to fend off any potential outside threats to our body and therefore it is very important to keep it healthy and functioning.

Kratom and similar herbal remedies have been used for centuries to boost the immune system, as their healing properties have been recognized even by the ancient tribes.  It does so through a group of alkaloids collectively called Immunostimulants.

Kratom successfully fights bacterial and virus infections in the body and it is a very powerful remover of oxidizing agents. Not only that, but it also helps diabetes patients with their insulin shortage, normalizes blood pressure and it even fights colon cancer. The most effective strains to boost our immune system are Borneo and Malaysian.

You shouldn’t take more than 5grams of Kratom at a time when it comes to boosting your immune system, not more is needed for the job.

As we can see, Kratom has a multitude of positive effects on the human body and can help out in a lot of different ways.

We believe that for the four reasons listed above, Kratom should be made legal everywhere as it is a substance that could help out millions of Americans find their way out of the claws of anxiety, addiction, pain…

Kratom is a very safe drug if you use it responsibly. Always stick to the recommended dosages and never take more than 30 grams at a time. Those taking Kratom to just chase a high might be tempted to do more of it, but that’s a sure pathway to abuse and even dependence.

Kratom is a great drug if you respect its boundaries and it will guide you well if you do so. However, if you start fooling around, Kratom can potentially become unsafe and have side effects such as nausea, agitation and it can even cause anxiety so you should be careful before you start disrespecting the flower.

It’s important to buy high-quality Kratom from a sustainable source because if you get Kratom that doesn’t enjoy high purity, you will not get much of the effects. The first and most important thing to look out for is where it’s coming from.

There are a lot of vendors peddling Kratom that comes from India and while Kratom in India is legal, their quality is subpar at best. The best Kratom comes from South East Asia and that’s the only place you should be buying it from. If you want to know even more information on where to buy Kratom, please click this link and it will redirect you to one of our other articles on the subject. 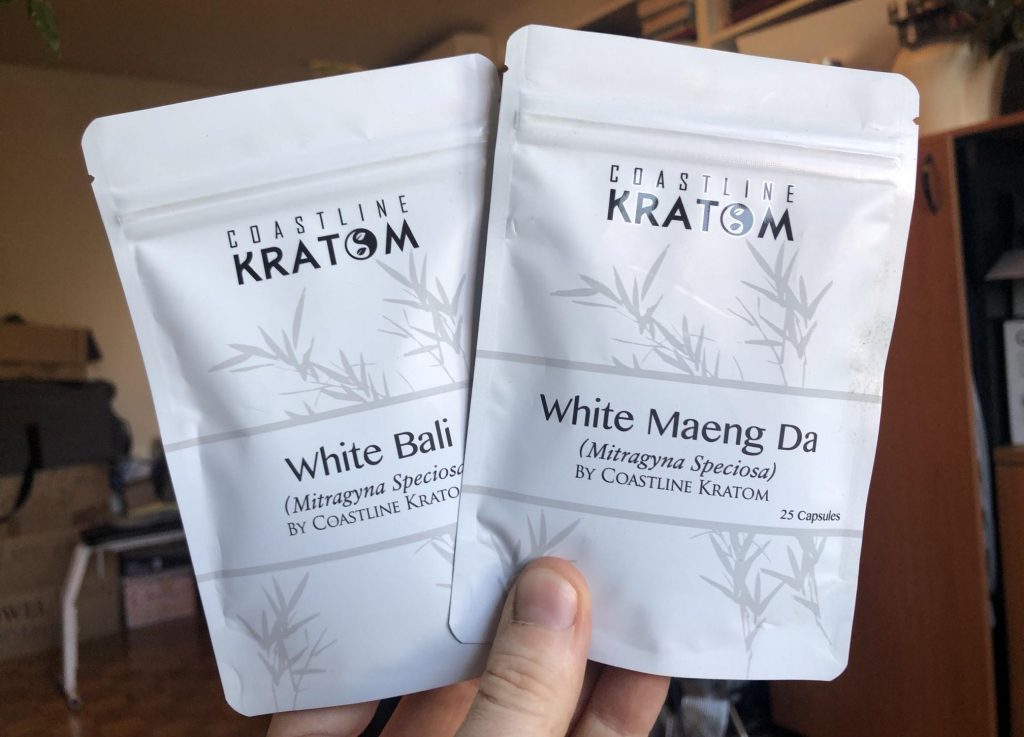 To conclude, we’ve seen that Kratom has a lot to offer to the American people and to humans all over the world. We shouldn’t let any organization prevent us from enjoying something that is our given right under the constitution.

It is not clear whether Kratom will stay legal or not, but we should fight tooth and nail to keep it legal in as many states as possible and to even push for legislation in states where it is currently illegal.

Let’s hope for a better future, where we can all enjoy the marvels of Kratom, without any outside force meddling with our business.