Drug testing is getting more common in the USA, which is amazing considering that cannabis is being legalized as an increasing rate across the continent as well. Learning how to pass any type of drug test as a weed smoker is therefore crucial.

This is who I’m aiming at here. People who smoke a bit of weed, and who then don’t want to not get a job, or lose a job, just because five days ago they had a joint. It’s deeply unfair, by telling you how you can easily pass any type of drug test, even with very short notice, I’m hoping to help reasonable and responsible people from getting trapped.

So, buckle up, because in the next five minutes you’re going to learn everything you need to know to pass saliva, urine, and hair drug tests.

The Problem With Drug Testing & The Different Types You Could Face

For me, the main problem with drug testing is that it can pick you up as having consumed drugs months ago. That’s completely true of hair drug testing.

So, you had a joint three months ago, but now you’re not going to get a job because that? It’s literally insane.

But it’s just not hair drug testing which is dangerous.

Urine sample drug testing can pick up drug metabolites in the body for a few days if you are a moderate user. But if you smoke weed regularly, you could be picked up as positive up to 2 months after you last smoked a joint. Again, literally insane that you would lose a job, or not get a job, because of that.

Oral drug testing isn’t dangerous in the long term, because most drug metabolites are undetectable in saliva after a couple of days. But it is easy to administer on the spot, meaning if you smoked a joint last night, and are completely fine, you could be tested on the spot at work, and lose your job. For me, again, that’s just ludicrous.

How Long Drug Metabolites Stay In Your System

People often search online to find out how long drug metabolites stay in your system. However, it’s not a simple as is made out to quantify that.

For a start, it’s “average” drug detection times for “moderate” users. Can anyone quantify what either of those things really is?

Moderate tends to mean someone who uses drugs once per week, in a moderate manner. So not a huge dose.

But that doesn’t really help the huge amount of people who do it slightly more than that, these average drug detection times could be far longer, but they can’t find the information out.

If you look online, these are the rough average drug detection times (in urine) you will always see:

In fact, sometimes the information is so poor that they just say benzos are detectable for up to 3 days, or up to 3 weeks. They don’t even make a distinction on the difference between short and long-acting ones. In reality, the difference is massive, weeks. 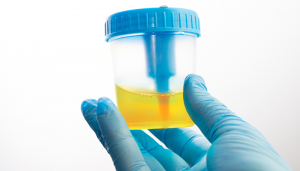 And then, as I’ve said, if you’re using any drug more than about once per week, those detection times become absolutely meaningless.

Also, “average” doesn’t account for individual circumstances. Very few people are truly average. Things like your weight, age, metabolism, general health, the dose and purity what you’re taking, if you’re taking multiple things together like alcohol which slows down your ability to process things, lots of different variables come into play here.

The truth is that if you’re a regular user, a couple of times a week, at doses that gets you high, then you going to be detectable in urine for about one week. If it’s a long action benzos, or weed smoking, then it’s going to be longer than that.

In fact, if you are a daily weed smoker, and you just stop, you could still have cannabis metabolites in your body three months later. That’s because cannabis metabolites are shaped differently to most other types, and they cling to fat cells. These then detach themselves work their way out over weeks, rather than days.

So the problem you’ve got as you just don’t know how long is going to take you to get clean.

For me, unless you’ve got several weeks, even accelerating things with detox pills down to about one week, a natural detox is not a viable option. If you’re facing a drug test, especially at the short notice of one week, or even just a couple of days, then the following are the only ways that I really think you can pass that drug test.

How To Pass A Urine Sample Drug Test

Let’s first talk you through the most common type of drug test, the urine sample drug test.

Mostly, any drug you take will be detectable for up to a week in urine, more commonly three or four days, but the heavier your drug use, the longer it will be.

As I’ve said, if it’s heavy cannabis use, it could be detectable several weeks into the future as metabolites cling to cells in the body and randomly work their way out.

When it comes to passing a urine sample drug test, even at short notice, it’s actually relatively straightforward because most modern drug testing is unsupervised.

You should know if you are facing a supervised drug test in advance because you should be told. If it’s for law enforcement or probation purposes, then it would usually be supervised. But for most employment drug tests, you will face an unsupervised test.

That means it’s easy to smuggle high-quality fake urine in and submit that in place of your own urine. 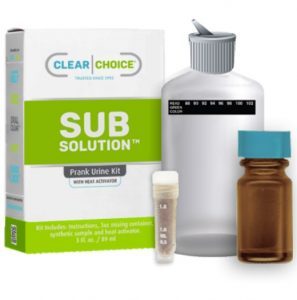 Sub Solution is the brand I would recommend you use. It costs $80, but it contains 15 chemicals found in real urine. It also looks and smells like real urine, so it virtually undetectable unless you face an incredibly high level of scrutiny.

Sub Solution should pass basic validity checks, and even the highest level of the inspection through gas chromatography – mass spectrometry analysis.

Sub Solution also comes with heat activator powder. That means you can heat the sample up to the correct temperature just before you go into the building where you’re going to submit your sample. Tap about one third in, agitate it until it’s disappeared, and wait for the temperature to gently rise. It’s that simple.

If you don’t want to smuggle in a fake sample, then a high-quality detox drink is your best option.

All you have to do is drink the contents of the bottle smoothly over about 15 minutes. Do that 90 minutes before you leave your drug test, and then urinate about three times. That should give you three or four hours clean.

A detox drink isn’t permanent though. It flushes out the toxins in your kidneys and bladder, and flood your body with things found in urine so that it appears balanced and natural for a few hours.

As soon as the toxins work their way through your kidneys again, you will test positive. So once you have used the detox drink it’s imperative you get to the drug testing facility as quickly as possible.

How To Pass A Hair Follicle Drug Test

The most difficult type of drug test to pass is the hair follicle drug test. That’s because of how drug metabolites get trapped in the hair shaft.

When you take drugs, the metabolites rush round your bloodstream. Some of them get trapped under your scalp, at the base of the hair follicles inside the skin.

As the hair grows, they are pulled up into the hair, and the scaly layer over the hair, called the cuticle, closes over them and traps them.

The only way to remove the toxins that open up the hard cuticle layer, flush them out, and then shut the cuticles up again. That’s not easy to do without destroying the hair completely.

To my knowledge, there’s only one way that you can truly remove drug toxins from under the hard cuticle layer of the hair shaft. It’s called the Macujo method.

The Macujo method is quite invasive, in terms of the amount of ingredients, the cost, and the number of times it has to be done to remove all the toxins. However, it won’t permanently destroy your hair or scalp, which some other methods (Jerry G method) can do.

If you want to read a detailed breakdown of how the Macujo method works, and full instructions to do it, you can click here.

But briefly, it uses a mixture of household products, and the key ingredient of Aloe Toxin Rid (old formula) shampoo. Use ingredients in order, twice per day. You do this for at least three or four days, and it really works to flush out the drug toxins so that you can pass a hair follicle drug test.

How To Pass A Saliva Drug Test

The last type of drug test I’m going to talk to you about here is the saliva (mouth swab) drug test. I’m not going to bother talking about blood testing because it’s so rare as to be pointless. There’s no way around it anyway, other than time for toxins to leave your blood.

Mouth swab drug testing is not dangerous after a couple of days. Most people won’t have drug toxins in their saliva after that amount of time.

What makes the saliva drug test really dangerous is how it can be administered by non-specialist people, basically anywhere.

Roadside drug testing is getting very popular around the world. Police can administer it on the spot by the side of your car.

It’s also used more and more widely for employment purposes in the USA. You could turn up for a job interview, and at the end of it rather than being told you have to report to a clinic to submit a urine sample, they could take a mouth swab test on the spot from you.

The absolute best way to pass a saliva drug test is Oral Clear gum. It’s a single capsule of concentrated liquid that you pop in your mouth discreetly, swill around for 30 seconds, and then you swallow everything.

So, it’s pretty much undetectable, and you can do it literally with somebody in the room with you. As long as they turn their head and look for ways you can put the capsule in your mouth and swill it around for about 15 seconds, then you will pass a drug test.

Oral Clear gum lasts about 15 minutes. Not long, but long enough for you to pass that important on the spot oral drug test.

Closing here, I’m going to give you a few words of advice on where to buy the products I’ve just talk to you about.

Don’t buy them from general retailers. Places like eBay and Amazon don’t sell them. Anything you see for sale on there from third-party sellers is pretty much always fake, or out of date product.

You can only buy these products from specialist retail resellers, and also from the company themselves in the USA. But don’t worry, you’ll get rapid domestic shipping. For me, this stuff often arrives in a couple of days.

You can buy Oral Clear gum from Test Negative. It’s not cheap, costing $90 for a single capsule. You can keep it on you at all times, and never again get caught out.

You can also buy the best to brands of fake urine, sub solution and quick luck, from Test Negative. If you do, make sure you get it with “the practice kit” so you can practice with the heat activator powder before the day of your test.

How To Make An Incredible Kratom Smoothie

A Guide On Cannabis Consumption In 2021

Tags: how to pass a drug test

Everything You Need To Know About Macronutrients In Five Minutes

My Top Bodybuilding Tips To Get You Started