More than two-thirds of the American population have recognized the vast benefits marijuana use brings to the table and they have voiced their opinion loud and clear: America wants to be a country where marijuana use is legal, decriminalized and available for recreational use.

As a result of this opinion holding such widespread popularity, many states have changes their old laws and complied with the requests of the American people, either by decriminalizing it completely or allowing the use for medical purposes.

So far, 33 states allow marijuana to be used for medical reasons and 11 of those states go as far as to allow recreational use. People formerly accused and incarcerated of marijuana possession have now had their criminal records expunged thanks to the new laws that came into place.

That all sounds fine and dandy, but there is one thing left unmentioned here and that is federal marijuana legalization. How do things stand there and is the law that has prohibited millions of hard-working Americans to enjoy the Flower ever going to budge?

That is what we’re trying to find out in this article.

The Federal Law on Marijuana: A Brief History

Marijuana wasn’t always a Schedule 1 drug, alongside with nasty compounds such as heroin or cocaine, but was used and grown by our prominent president George Washington on his own private hemp farm. Marijuana was so important to the American people that it even appeared on the ten-dollar bill for a period of time.

This all started to change when the Marihuana Tax Act came to power in 1937. It was at this point that all recreational use of marijuana became forbidden and a tax was imposed on all states that allowed its use for medical purposes.

Things only became worse in the next year, in 1938, when the Federal Pure Food, Drug, and Cosmetics Act of 1938 defined marijuana as a dangerous drug, as if it were something causing harm to millions of Americans.

The icing on the cake was the Boggs Act of 1951 which imposed mandatory sentencing for possession of marijuana. The fines were up to 20,000$ and a prison stint between two to ten years.

Things seemed to get better in 1970 where mandatory sentencing was repealed but a new problem arose in the form of the Controlled Substances Act where marijuana was deemed as a useless drug with no medical purposes and the act had it stigmatized as a drug causing addiction and dependence. The biggest strike was putting it in line with cocaine and heroin, seemingly forever cementing it as an illegal, dangerous and toxic drug.

Up until this date, nothing much has changed in our Federal Law. Marijuana is still illegal to import, produce or possess under Federal Law and federal marijuana legalization seems to be years away from ever going online.

Are things really that grim? Not at all! There have been massive amounts of pressure being put on those lofty politicians in Congress and things seem to be moving in an upward trend. 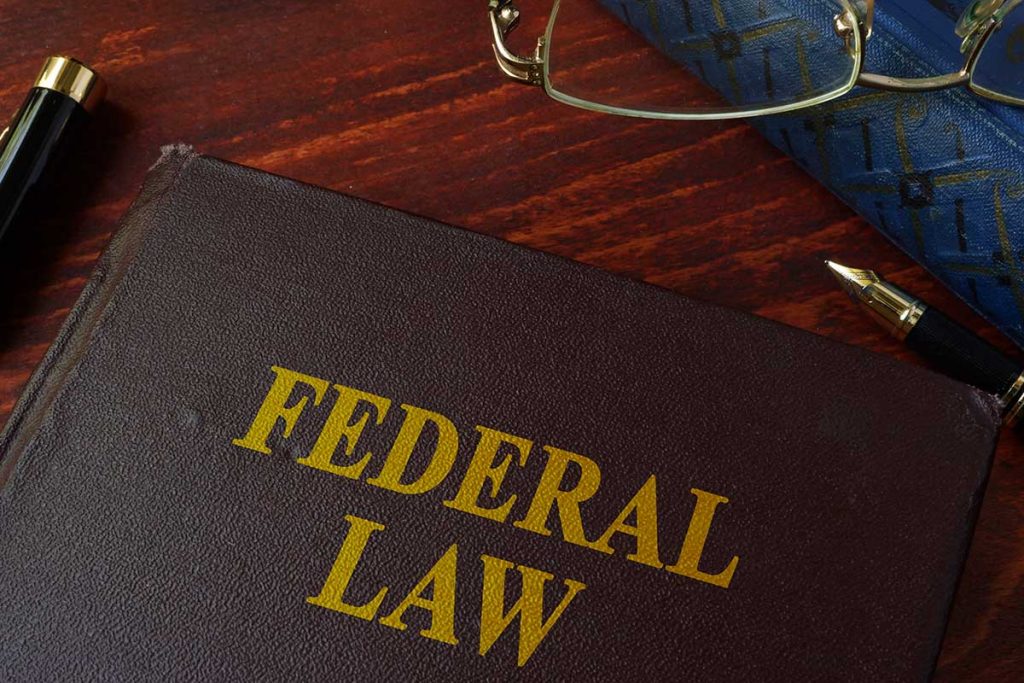 The State Law on Marijuana: An Overview

It all started with two waves of decriminalization that first began in the state of Oregon, where the penalty for possessing marijuana had been reduced to just a symbolical $100 fine.

Other states soon joined in and in just over two decades, most states have completely decriminalized marijuana.

The next important point happened in 2012 when two brave states, Colorado and Washington decided that enough was enough, passing the bill to completely legalize marijuana.

Marijuana was ‘degraded’ and put together with the likes of alcohol where one could possess up to an ounce and had to be over 21 to actively use it.

The last state to completely legalize marijuana was Illinois and what’s important to note about their way of legislation is that they were the first ones to legalize it through an act of the legislature, allowing for commercial sale of marijuana.

Before moving forward, let’s further examine the incredible divide between federal and state law in regards to marijuana legalization and how that leads to massive hurdles for the American people.

Imagine having a marijuana dispensary that operates legally within the state, but is not allowed to cross any borders, be they natural or man-made because of the strict Federal Law on marijuana?

This is what happens to many vendors selling marijuana as they cannot send their products across any borders, even if marijuana is legal between both the recipient and the sender of the marijuana.

The biggest problem seems to stem from islands, where you cannot cross federal waters with any amount of marijuana as it is completely illegal.

One such island is Nantucket, where marijuana has been legalized but is not able to be imported because the surrounding waters are under Federal Law. This poses huge problems to the native population of that island, as they cannot get enough marijuana into their homeland, but have to grow their own instead.

This is just one of many examples of the failure of our politicians to act in favor of the American people.

One might think, it’s just one island, what does it matter?

Ask our six-hundred and sixty thousand citizens arrested because of marijuana-related offenses if it matters.

Ask our law enforcement and police officers that have zero clues about marijuana and its effects. Because they are not ready to deal with the issue of facing a marijuana user, they are more likely to use violence against them.

As we can see, federal marijuana legalization would help out so many American people. It is a damn shame that such an outdated law is still in effect.

Drug Testing At The Workplace In States Where Marijuana Is Legal

In the last section, we mentioned that some workers lost their jobs because they tested positive on marijuana during one of the many drug tests employers use.

The problem with testing for marijuana is that it stays in the system for way longer than alcohol and tests aren’t advanced enough to know when the substance was imbued in the first place.

This means that you could technically have smoked weed weeks ago, yet still fail a marijuana drug test. The thing is that marijuana lingers for up to three months in the hair and around two weeks in our fat cells. This can cause massive problems for smokers that tend to work in places strictly governed by the Federal government as they have to test their workers under Federal Law.

The thing is, employers have a right to enforce an environment that is completely drug-free which means that even if you screen for marijuana in a state where it is completely legal, your employer can still fire you from your job and he won’t face any legal repercussions for it.

However, things are going in the right direction and in some cases where employees were fired over marijuana-related drug testings in states where it was legal to use it successfully sued for workplace discrimination. This especially applies to instances where the marijuana user was considered disabled.

It even becomes better as states such as Nevada make it illegal for an employer to not hire you if you fail a marijuana drug test. This law should be in effect by 2020 and other states where casual marijuana use is legal are bound to join in.

Don’t take this information as something foolproof as state and federal laws are constantly changing and you never know what tomorrow might bring.

Speaking of the future, let’s discuss the new bill that has just arrived in Congress for approval.

Plans For The Future: Federal Marijuana Legalization in Congress

The new bill is sponsored by none other than the House Judiciary Committee Chairman Jerrold Nadler, who has been a loud voice for federal marijuana legalization.

This new legislation proposed to the Congress would remove marijuana as a Schedule I drug, it would also erase it from the CSA (Controlled Substances Act) and to top it all off, there would be monetary resources used to repair the damage caused by that very same Act.

This act would also institute a new five percent tax on all marijuana sales and those founds would be used nobly to help people that have been harmed by the act, such as prisoners, get their life back on track. It would also give out loans to small companies in the marijuana business that are just starting off in their journey and that desperately need those funds to move up the ladder.

Lastly, the MORE (Marijuana Opportunity Reinvestment and Expungement) act would also overlook the resentencing and the abolishment of previous criminal records related to marijuana use, distribution or possession.

This act would free up our already overcrowded prisons and provide justice for those that have been incarcerated for so long for minor offenses such as marijuana possession, most of whom are people of color, we must mention.

As of writing this article, there are currently 55 cosponsors for this act, in laymen terms, supporters, with 54 of them being Democrats.

There are many skeptics when it comes to the passing of the MORE act and prognosis made by Skopos Lab state that there is less than a 1% chance that this bill is going to be passed. The reason behind such a low prediction stems from the fact that the Republicans enjoy the Senate majority and they do not seem too keen on accepting this act, as shown by the number of cosponsors they have.

Some experts are of the opinion that Democrats in favor of the MORE act should focus their attention on another bill, the Strengthening the Tenth Amendment Through Entrusting States (STATES) Act, it has a much higher chance to pass through Congress as it’s already endorsed by President Donald Trump.

The problem with this act is that it would not reschedule marijuana from the CSA act and that it would do little to help those most afflicted by the failed war on drugs this country has been leading for so long.

The good thing about this bill is that it would exempt from Federal Law those states that have proclaimed marijuana as legal, meaning that islands such as Nantucket could finally start trading outside of their Inhabitat.

Passing this bill would be a slow move, but a good start towards federal marijuana legalization.

We can only hope that the mounting pressure of the American population prevails and that marijuana finally becomes legal in all states and at the Federal level.

By changing this law and enacting federal marijuana legalization, we would become a country that cares for all of its people, no matter what their financial status or what color of skin they happen to be.

We believe that marijuana is a completely safe drug that offers millions of Americans the relief they so desperately need and we’re hopeful that with time, the government will let the MORE act see the light of day.