Home » Kratom » Does Kratom Show Up On A Drug Test?
Kratom

Does Kratom Show Up On A Drug Test?

It’s a question I’ve not seen answered thoroughly anywhere. Wondering how long does kratom stay in your system is something that could catch a lot of people out if you don’t know the answer to that, especially right now when drug testing is increasing.

So I’m going to tell you the answer to the question around does kratom show up on a drug test at all, if there’s a specialized kratom drug test out there, and what your likelihood of being found using kratom is.

Whether it’s on the job drug testing or preplanned drug testing, it’s good to be aware of the different threats you could face. So what we’re going to do here is tell you everything you need to know in regards to passing a drug test as a kratom user.

How Long Does Kratom Stay In Your System?

The first question I want to answer is the one around how long does kratom stay in your system?

Unfortunately, that’s not a straightforward question to answer.

Kratom hasn’t undergone much research generally, and most of the research that has happened took place in animals. However, from the tests that have been done, and anecdotal evidence, it appears that the half-life of kratom is as long as 24 hours. That’s actually quite long in terms of drugs.

That means it could take 48 hours for someone to eliminate all the toxins from the body. But that’s someone who’s just taken it once and has no previous kratom in their body.

Unfortunately, some people could take up to 9 days to get rid of all the kratom metabolites in their bodies. That’s unusual, and you’ll have to have several of the triggers that make that happen, but the learning point is it’s going to take several days for a lot of regular users.

Although kratom contains 40 different alkaloids, most of those are minor and caffeine-like in nature. It’s only Mitragynine that looked for in any type of drug test.

What Things Affect How Long Kratom Stays In Your System?

So although an ideal world you could be clean of kratom in 48 hours, let’s look at what can affect the length of time that kratom stays in your system: 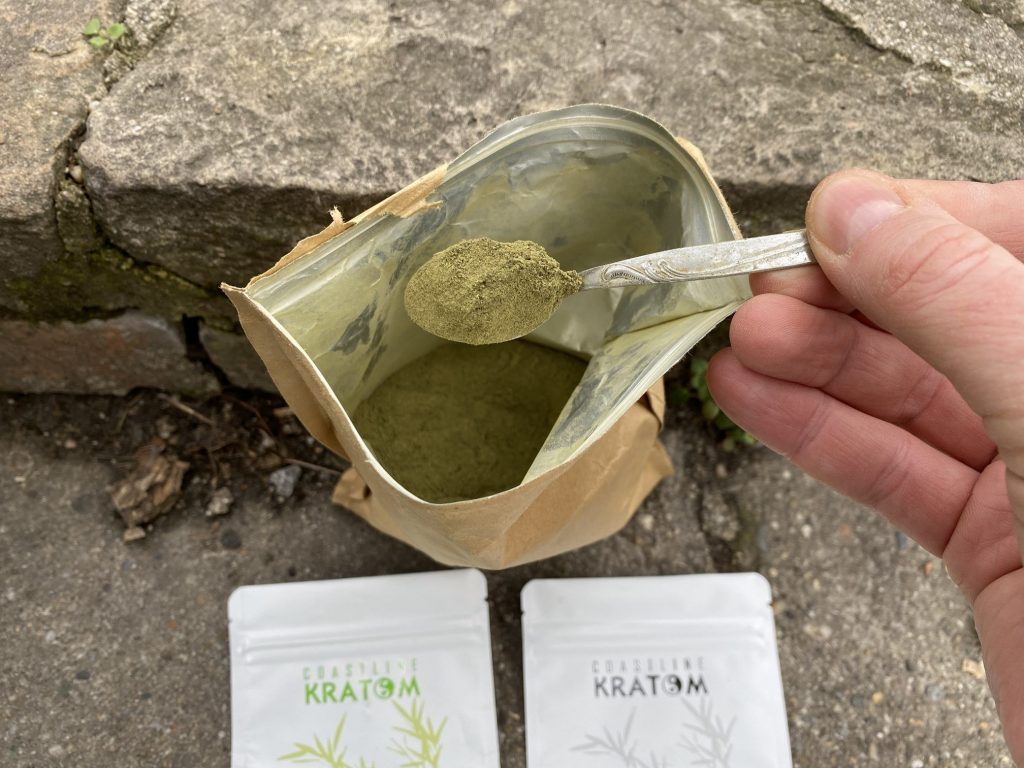 Is There A Specific Kratom Drug Test?

There isn’t a specific kratom drug test. However, kratom can appear as a special panel on certain advanced types of drug tests.

However, for the standard drug testing, your five panel drug tests, all the way through to the advanced 12 panel drug test, kratom will not be detectable. It’s only with the additional panel that specifically picks up the kratom metabolite is present that you could be detected.

This type of drug test is incredibly rare, and in fact, I’ve never heard of anyone having a kratom drug test administered. In fact, there’s far more chance of you being found out for using kratom by having a standard drug test pick up a false positive.

Because kratom is an opiate in construction, it can sometimes be found as a false positive for opium or heroin, or a prescription opiate.

If that’s picked up, and you don’t have a prescription, then how on earth are you going to prove you haven’t been abusing prescription meds, or that you’re not taking heroin or opiates, or kratom?

Although it’s rare, it is a problem, and a far bigger problem than kratom actually being detected in its own right using a special type of drug test with the kratom panel tacked onto it.

What Can I Do To Minimize The Chance Of Getting Caught With Kratom In My System?

So let’s finish talking about kratom drug test problems by telling you how you can minimize the chances of getting caught.

Firstly, the obvious thing is to make sure you leave plenty of time between the last dose of kratom and your drug test. You can’t buy a drug test easily to test yourself in advance of the day, so you just have to give enough time.

If you allow four days break from kratom before your test for a moderate user (a couple of times a week), seven days for a regular user, and 10 days for a daily user, then you will be clean.

Keep your body in good shape so that kratom is metabolized and dealt with more quickly as well. Keep healthy, and eat good food, and drink plenty of water around the time you take kratom.

And finally, think about the countermeasures you could put in place if you think you will get clean. Get yourself a detox drink, or some synthetic urine, and then you will have less worry about failing any type of drug test, including having kratom detected.

Five Fantastic Foods You Must Stop Throwing Away