Dab Rig vs. Dab Pen – Which is Better?

When vaping first became a viable substitute for smoking nobody could have foreseen the massive growth in the market. Now that cannabis has been legalized in many states and decriminalized in others, vaping is rapidly becoming the way to ingest weed as well as other products.

There are many different devices that you can use to get your hit. In the article that follows we are going to take a look at two of these: dab rigs and dab pens. Each has its merits, and both are popular with many users, but which is best? Let’s begin by finding out what each of these devices consists of, and then we’ll look at the differences between them and the pros and cons involved.

What is a Dab Rig?

Less commonplace than the dab pen, the dab rig is nevertheless gaining in popularity with those who like a traditional bong experience. A dab rig is designed to give the best possible hit. For clarity, when we talk about a dab, we’re talking about wax concentrate marijuana rather than dry herb. It’s easier to use and gives the same effect.

So, the dab rig, what is it? It’s your vape replacement for a regular bong in effect. A dab rig is a glass device with a chamber for holding water, a simple mouthpiece, and a ‘nail’ which is the bowl into which the wax concentrate is placed. This is then heated by an external heat source – a blowtorch is usually the tool of choice – to the point at which the concentrate is vaporized. The user then inhales the vape cloud.

That’s the dab rig in basic form. It’s crude – much like a regular bong – but it does the job. Some can be more sophisticated, and all are quite large items. Before we get into the benefits and drawbacks of the dab rig, we need to look at the dab pen and what these devices do.

What is a Dab Pen?

When portable vaping devices first came to the market they were largely pen-shaped – long and thin. The name ‘dab pen’ has stuck, even though many of the more impressive such devices are no longer shaped like a pen. Confusingly you may see them sold as a dab pen or named as wax pen, so be aware these are the same thing.

A dab pen is a portable device that can be used to vape wax concentrate cannabis. Some can also be used for CBD, and there are pens for e-liquids and dry herbs. The dab pen consists of an outer casing on which will be the operating switches and LED indicators in some cases.

Inside the pen, things are quite simple. There is a compartment into which the wax dab is put. A tiny rechargeable battery heats a ‘coil’ or atomizer to the point at which the wax is vaporized. Via an attached mouthpiece the user then inhales as he or she would a regular joint or cigarette.

So, now we know what each one is, we need to talk about the differences and the pros and cons of each.

How do they Differ?

The main differences between a dab rig and dab pen are clear to see: the rig is large, glass, and fragile. The pen is small, discreet, and portable. In a nutshell that is it, but we want to talk about the main pros and cons of each. Let’s not hang about.

Benefits and Drawbacks of a Dab Rig

Straight to the point here: you are not going to get a better hit than you do with a dab rig. Just as a bong gives a completely different experience to a joint, so the dab rig outranks the pen in terms of quality. It’s also great for parties and when you have people around.

But – and there quite a few buts here – the dab rig is something for use in one place. You don’t want to be moving it around as it is glass and therefore prone to breakage. It’s far from portable, and also quite a crude method of vaping cannabis. You also need an external heat source, although no electricity is involved.

So, to summarise, the dab rig gives fantastic results but is not portable. 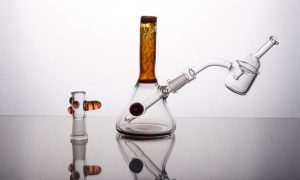 Benefits and Drawbacks of a Dab Pen

The benefits of a dab pen are converse to those of the dab rig. The pen device is small enough to fit in a pocket or purse. It is designed to be discreet and portable. It does need the battery recharging every so many hit, but with some models, a once-a-week charge is enough for the occasional user.

There is no ceremony involved with the dab pen, no need to find an external heat source as everything is integral. With most models, you can also vary the voltage which adjusts the temperature at which the cannabis is atomized. This allows the user to find a setting and taste that they prefer.

However, also opposite to the dab rig is that the pen will not give as potent a hit as the rig. It’s designed for use on the move and serves this purpose very well. So, a summary of the dab pen: it is portable, discreet, and easy to use. Which is the best one for you? That’s something that a personal choice, but we’ll finish by offering our verdict on the dab rig vs. dab pen argument.

While the article is brief, we think that we have covered the different aspects of the dab rig and the dab pen quite neatly above. If you’re looking for a definite answer to the ‘which is best’ question that needs to be considered in different situations.

We’ve stated already that the dab rig provides the most potent method of using marijuana. If you vape cannabis regularly at home, a rig is a great choice. It will be popular with guests too. Bear in mind it’s quite a crude setup and one that needs to be treated carefully, especially with the naked flame involved.

The dab pen may not provide as strong a hit but where it wins is in its portability, ease of use, and discretion. Out on the town, for example, you could pop outside and have a quick draw and nobody will be any the wiser.

Which is for you? If you want your cannabis on the move the dab pen is a must, and the choice of makes and models is impressive. Why not buy one for when you’re out, and a dab rig set up for in the home? That’s the best of both worlds! We hope this article has helped you understand the difference between the dab pen and the rig, so enjoy your cannabis vaping.

With these Factors, You Will Never Go Wrong When Choosing Cannabinoids