If you’re looking to choose Aniracetam over all the other nootropic drugs out there, then you can expect it to provide you with heightened concentration, increased attentiveness, improved complex thinking, creativity, reduced anxiety, and learning ability as well as better memory formation.

However, it might also come with side effects. Some of the anecdotal reports by customers that can be found online correspond with the findings of research studies, but there are also instances where they do not.

Thus, the goal of aniracetam reviews is to clarify whether aniracetam is indeed effective in improving one’s cognitive performance.

The exact benefits that using aniracetam will yield is difficult to ascertain. However, certain anecdotal evidence will show the importance of using this drug.

For example, using aniracetam can cause an increase in one’s sensory experience, allowing them to further enjoy whatever they are doing. This also makes colors seem more vibrant, which could prove useful depending on what you are currently doing at the time. All of this can also result in a much better mood.

Aniracetam can also result in better creativity. If you find yourself having to write a script for a new story or a paper for a school requirement, you might find that using aniracetam can result in an increase in the rate at which ideas pop into your brain.

Not only will ideas be more willing to come forth, but there is also the chance that they will be of much higher quality compared to what you would normally get under the effects of the other “smart” drugs like caffeine or modafinil.

Dosage Based On My Experience

How much aniracetam to take also an important question. For aniracetam powder, 1,500 milligrams is the recommended dosage per day. This must be split between two doses of 750 milligrams, one morning and one afternoon dose. Another significant information about how to take aniracetam is that it’s fat-soluble, so taking it along with meals that have high healthy fat content is beneficial. 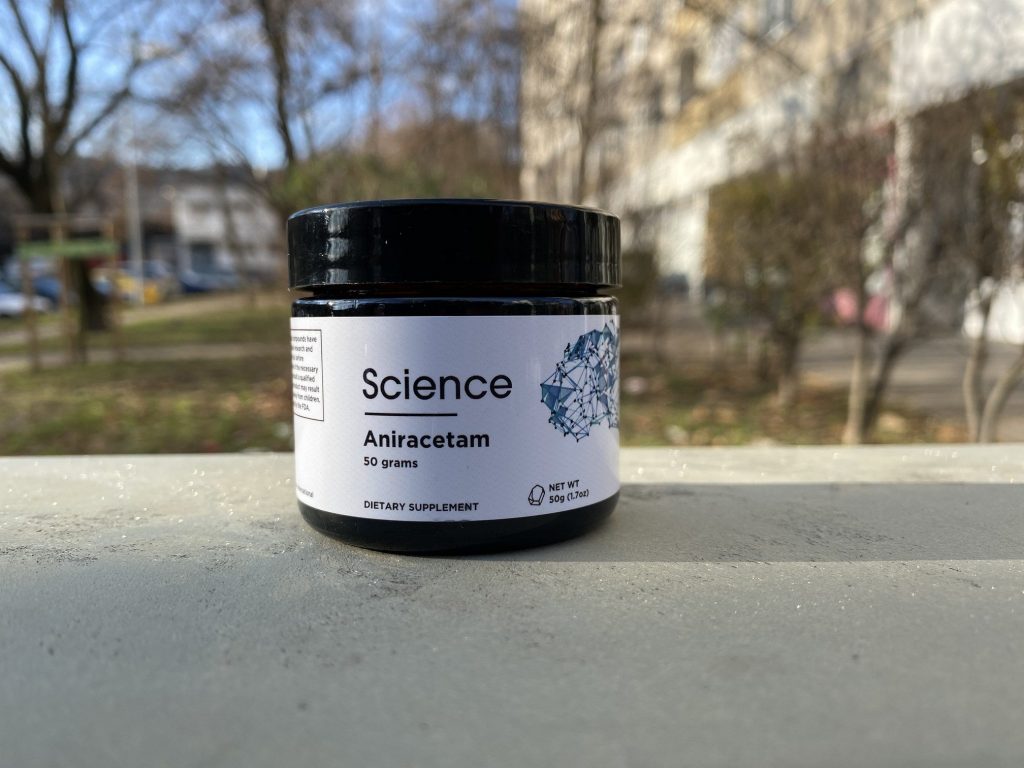 Does It Really Work?

If we go by the numerous anecdotal reports that can be found on the internet, then yes, aniracetam definitely works. As a matter of fact, due to its ability to enter the bloodstream quickly, it can also reach its peak concentration around your brain much faster.

Because it also comes with fewer side effects or unwanted “feeling”, aniracetam is also more popular even compared to its older relative piracetam.

Most people state that they can feel the effects of aniracetam 15 to 20 minutes after taking it. This results in an increase in mental stimulation and creative output, as well as several other markets of mental capacity and cognitive functions.

Not to mention, its effects are far more effective compared to what you would get from drinking coffee.

Some people also found that the drug also comes with anxiolytic effects that help in reducing social anxiety. The people who experienced this effect stated that they feel more relaxed and at ease after taking aniracetam.

However, it should be noted that aniracetam will not always work and that it does not work for everyone. For some people, taking aniracetam will result in nothing at best, or even cause negative effects at worst.

This is proven by the slew of people who mentioned that taking aniracetam did absolutely nothing for them, which is totally possible.

In short, to be absolutely sure that aniracetam is the nootropic for you, you first need to buy one then try it yourself. Only then will you know if it will do for you what you need it to do.

How Does It Work?

As already mentioned, skepticism must be maintained when dealing with anecdotal evidence. However, the proof for aniracetam’s efficacy is not limited to such evidence. In fact, there are several scientific studies that show that aniracetam is indeed effective.

One study comes from the European Journal of Pharmacology, where scientists discovered aniracetam’s ability to reduce anxiety. This is done by affecting the serotonergic, dopaminergic, and cholinergic systems of the brain.

Another study published in 2001 in the Psychopharmacology journal, scientists found that aniracetam also exhibits antidepressant properties, especially for people who just had a stroke.

Research studies have also shown evidence that points to aniracetam being able to help with increasing learning ability, adding neuroprotection, and heightening the brain-derived neurotrophic factor (BDNF), which acts as a fertilizer for your brain.

In short, there are studies that show conclusive evidence that aniracetam works wonders when it comes to improving cognitive functions.

However, the number of studies conducted on adults with good health in order to definitely say that the drug is indeed effective.

While it’s true that the scientific proof is not enough to confidently say that this particular nootropic is truly effective, it is also true that the same can be said for pretty much any nootropic drug on the market.

All racetams share a similar chemical structure, but they still have minute differences that result in different effects after interacting with our bodies (specifically our brain). This is true for both Piracetam and Aniracetam. Despite both being racetams, their effects are still different enough to warrant a closer look.

Piracetam has existed for longer, and so its effects are more studied and well-documented. It has been shown that Piracetam’s effects last longer in general, but it is also less intensive.

On the other hand, aniracetam is absorbed by the body very quickly. This results in a shorter half-life, as well as lower bioavailability (most of it is changed before entering your bloodstream). Since they are both racetams, you can expect both of these drugs to help in improving memory and learning.

What makes aniracetam different from piracetam, however, is that it can also reduce anxiety, depression, and fear. In best cases, it even helps tremendously in improving sociability. Sometimes aniracetam can also improve concentration as well as attentiveness.

The glowing reviews praising aniracetam don’t just come from regular users who found it effective, but there are also those that come from media personalities who are well-known in the biohacking community.

One example of this is Jesse Lawler, who mentioned in one recent interview that he uses aniracetam as an integral part of his personal “creativity” stack.

Lawler’s reputation is backed by his identity as host of the popular podcast “Smart Drug Smarts”. He is known for not using that many nootropics, having mentioned no more than 5 in the entire interview. Despite this, he still considered aniracetam as one of his chosen ones.

Of course, the people who have positive experiences with using aniracetam are not limited to those within the community. Kurtis Frank, (Examine.com’s editor) wrote an aniracetam review under his pseudonym “silverhydra” which states that he also finds aniracetam to be the best racetam there is, due to its unique properties of being able to reduce social anxiety as well as improve language fluency.

Despite the abundance of glowing, positive aniracetam reviews showing its efficacy in enhancing cognitive functions, we must remember that these are still nothing more than anecdotal evidence and thus, we must maintain a healthy dose of skepticism. It’s also important to realize that what worked for someone will not necessarily work for everyone else.

The reason for this is that each person is unique. This includes our brain and its chemistry. What this means is that despite all the success stories regarding aniracetam use, there is bound to be a few users who found aniracetam to be useless at best, harmful at worst.

Of course, this works both ways in that just because it did not work for one person, this does not mean that it won’t work for you.

One such example is a user in Reddit posting in the local nootropics community. He stated that after taking a 750-milligram dose (along with yogurt and fish oil), he started experienced fogginess. After an hour, he felt absolutely tired, as well as nauseated and disoriented. Finally, he said he also experienced a massive headache that almost felt like a migraine.

Several people mentioned that this may be due to him lacking choline, but it still goes to show just how much the effects can vary from person to person. After all, anecdotal evidence can be important in choosing what nootropic to use, but you must always remember that it will not always apply to you

Where To Buy Nootropics

If you’ve decided to get this supplement and on how to take aniracetam (powder, tablet, or capsule form), then the next thing you need to know is where to buy aniracetam. The best and easiest way would be to shop online. However, you must be absolutely sure that the store you’re buying from is trustworthy.

If your worry is where to buy aniracetam from, then here are our personal recommendation is to buy it from Science.bio.